From scratch: step by step to batch galvanizing

When batch galvanizing the production process follows simple steps that build on one another. The best conditions for a smooth hot-dip galvanizing process are achieved when the surface of the steel parts is metallically bright.

Therefore, we ask our customers to make sure that no foreign residues (e.g. traces of paint coatings, weld slag, labels, etc.) are on the goods supplied to the hot-dip galvanizing, otherwise galvanizing defects might occur. In addition, technological demands of "hot-dip galvanizing suitable design and manufacturing" should be observed. This means that, for example, feed and vent holes are provided in the steel parts, which allow air to leak into hollow spaces and ensure the break in and drain of the zinc.

From bath to bath: In BRISTA galvanizing your products are in good hands

In order to ensure a comprehensive, efficient, durable and economical corrosion protection for your steel components, we approach the hot-dip galvanizing systematically - from bath to bath and always with the utmost precision.

First, the metal parts are wet-chemically pretreated in different baths. They pass through a degreasing bath that removes the grease residues from the surface. In the following water-rinse the residues of the degreasing agent are rinsed. Next, the parts are treated in the pickling bath. Inherent residues like rust and scale are removed with diluted hydrochloric acid. In the flux bath – in a similar way as when soldering - substances are added. These perform a final "fine cleaning" of the steel surface when dipped into the molten zinc. This process ensures additionally that the entire surface is uniformly wetted while galvanizing. Prior to that, the aqueous flux film on the steel part is dried in a drying oven. Now the actual galvanizing of the steel part in the zinc pot follows. The melting point of zinc is 419 °C, whereas the liquid zinc is run up to an average of 450 °C in the boiler. 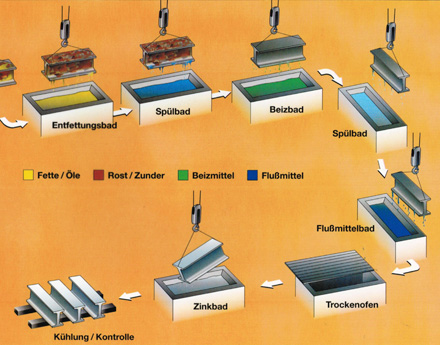 Hot-dip galvanizing in one of the most modern plants in Europe!

Thanks to the latest system technology, seamlessly interlocking processes and highly motivated and qualified employees you benefit from:

Maximum throughput of 240 t/day can be achieved with a vessel dimension of: 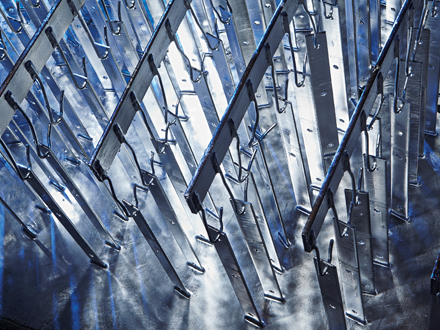 BRISTA: Environmental awareness as a maxim of a modern company

Being a modern and environmentally friendly company, we invest in the future, for people and the environment. Using the latest filtering equipment, high-tech control systems and most sensitive testing equipment all standard values are undercut and therefore a low-energy and low-waste production is guaranteed.
Our galvanizing plant not only meets the current, but also future demands on an environmentally friendly, quick, cost effective and competitive production:

Hot-dip galvanizing protects your components against corrosion – sustainably and long-lasting.

Relevant standards for this process, procedures and typical applications include the following:

What happens to the steel when hot-dip galvanizing at BRISTA

The influence of steel as the base material in the hot-dip galvanizing is big. This particularly applies to its chemical composition, especially the silicon and phosphorus content. The result of the formed zinc coating depends on this fact, as hot-dip galvanizing causes a chemical reaction between the steel and the molten zinc. Therefore, strong deviations of the chemical compositions may result in substantial differences in appearance and the thickness of zinc coatings as well as in the structure of the surface.

The DIN EN ISO 1461 points out that galvanizing is a method of protecting steel parts against corrosion in the first place. Thus, the protective effect is the most important - not the optics.

When the metal part is pulled out of the galvanizing bath, the zinc surface usually appears flowery. This is caused by lead and tin parts in the zinc pot.

The remaining heat as well as the steel composition cause that the textured zinc surface appears partially or even completely gray. This may not look good, but in terms of corrosion protection it is definitely not a defect! This also applies to the slow corrosion of each zinc coating over the years. Thus, the appearance may change from bright shiny to dull gray.

Hot-dip galvanizing can also cause so called zinc nibs – drainage points that occur while the material is drawn from the zinc pot. Excess zinc rinses off at the deepest part of the material. Through its hardening the zinc nibs are formed. Also, ash residues may remain on the material due to production.

White rust is a powdery, water-soluble product of zinc corrosion containing of zinc hydroxide and zinc oxide, which is formed in an environment with high humidity on freshly galvanized parts – exactly where the gray zinc patina layer has not formed yet. The formation of white rust on galvanized pieces cannot be avoided completely. Nevertheless, white rust is only an aesthetical disadvantage but quickly washes off when exposed to the weather, allowing the formation of the gray zinc patina as protection afterwards.

White rust formation can be mostly avoided by storing the parts in a dry environment with adequate ventilation. A frequently encountered cover with plastic film (e.g. shrunken pallets) is not recommended, since the formation of white rust is strongly supported by the condensation that cannot dry off.

Formation of white rust is not related to the galvanizing process and is not considered as a measure of the zinc coating's quality. It is rather a phenomenon that is very much dependent on the weather conditions when storing or transporting freshly galvanized parts.

White rust is therefore no valid reason for complaint!

This is also determined in DIN EN ISO 1461 under point 6.1 appearance; Paragraph 3. 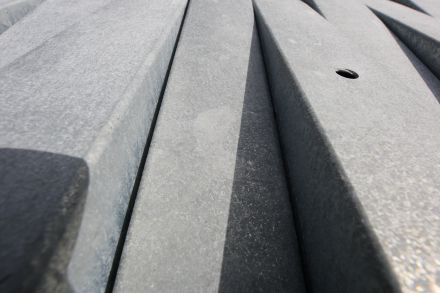 Zinc is a base metal and reacts quite rapidly with substances from its environment. The substances contained in the air therefore react rapidly with the metallic zinc. As a result, zinc forms zinc compounds (zinc oxide) on the surface. It is primarily these zinc compounds, which give the zinc its good corrosion resistance.

The atmospheric effect on the zinc coating is dependent on the aggressiveness of air. Clean countryside air harms the zinc significantly less than heavily polluted industrial air or saline sea air. 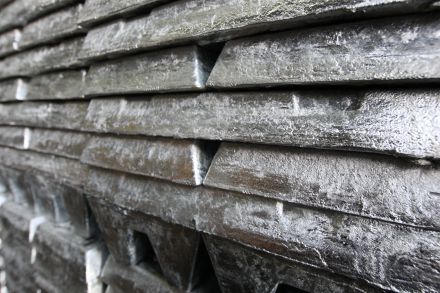 Other factors such as dust, humidity and air temperature also have a negative effect on the zinc coating. The corrosion load of the steel part can therefore turn out differently – depending mainly on the environment in which it was set up. However, no clear distinction between the respective atmosphere types (countryside, city, sea and industrial air) is possible as the transitions are fluid.